The world’s best-loved musical is back! Grittier and more glamorous than ever before.

Disabled theatregoers and their carers can get discount tickets. Please phone the Dominion Theatre access line on 020 7927 0929. 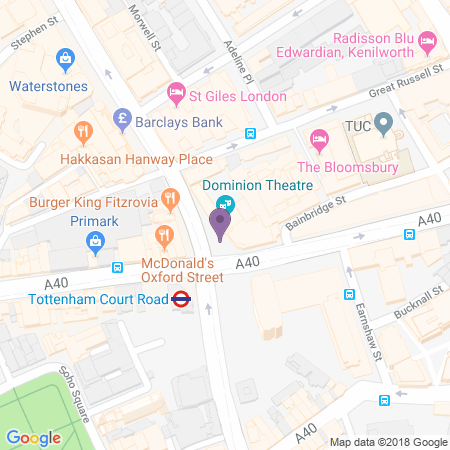 The Dominion Theatre, with its massive gold-coloured statue overlooking the foyer, is one of many fine examples of stunning 1930s Art Deco architecture in London’s theatreland. The beauty of its clean lines and elegant proportions bely the fact that the site was once a leper colony and , later, a brewery. Inside there’s a huge auditorium with sweeping rows of plush seats and an intricate decorated ceiling.

The Dominion Theatre was built in 1928 to ’29, with a steel frame, pale Portland stone facade and room for almost 3,000 people in the auditorium. Designed by W and TR Milburn, it was intended for live theatre but converted to a cinema in the early 1930s.

Built on the site of the Horse Shoe Brewery, it’s a location with a tragic past. When a huge vat of beer burst in 1814, twenty people were either crushed to death or drowned in alcohol.

Closing briefly at the height of the Blitz in October 1940, the theatre re-opened in January 1941.In December 1956 Rank, the cinema people, looked at rewiring and refurbishing the stage and facilities, but the cost was too high and they backed down.

The Dominion was finally used as a live theatre venue in 1957, at long last, with the Judy Garland Show, although they kept showing films too. South Pacific played April 1958, running for more than four years and closing in autumn 1962. Then it was the turn of Samuel Goldwyn’s Porgy and Bess. Cleopatra took the stage in 1963 followed by The Sound of Music in ’65 and Star, which followed major redecoration in 1968.

The Return of the Jedi opened in 1983 and the ‘80s also saw the Dominion become a popular venue for gigs, with appearances by bright stars like Dolly Parton. In the mid ‘80s the musical Time led to more internal reconstruction to house the show’s special effects.

There has been plenty of renovation over the past few years, including the creation of a rehearsal space above the foyer, which has seen rehearsals for showstoppers like We Will Rock You, Edward Scissorhands, Les Misérables, Cats, Hairspray and Zorro.

Hauntings at the Dominion!

Audience members have reported seeing the ghost of a brewery worker. Others have heard a ghostly child giggling. There has apparently been plenty of poltergeist activity. And some even suggest that Freddy Mercury’s spirit haunts the theatre.

Past shows at the Dominion Theatre

Since the early 1990s the Dominion Theatre has been home to David Ian and Paul Nicholas' Grease, Scrooge - The Musical, Swan Lake, Beauty and the Beast and Notre Dame de Paris. As well as the enormous West End hit, We Will Rock You.

The Dominion provides access for wheelchair users and other mobility-impaired people.

We’re a top destination for a wide variety of seat types and prices, with excellent availability on the full range of Dominion Theatre tickets.