Peppa Pig is excited to be going on a special day out with George, Mummy Pig and Daddy Pig - it’s going to be her best day ever!

Only Fools and Horses

Only Fools and Horses the Musical brings the iconic and much-loved comedy to life once more, through an ingenious and hilarious original score. Written by Paul Whitehouse and Jim Sullivan, fully endorsed by the Sullivan estate.

Sound CUSHTY?  Then book your tickets today - Only a forty-two carat PLONKER would miss it!

Disabled theatregoers and their carers can get discount tickets. Please phone the Theatre Royal Haymarket access line on 020 7930 8800. 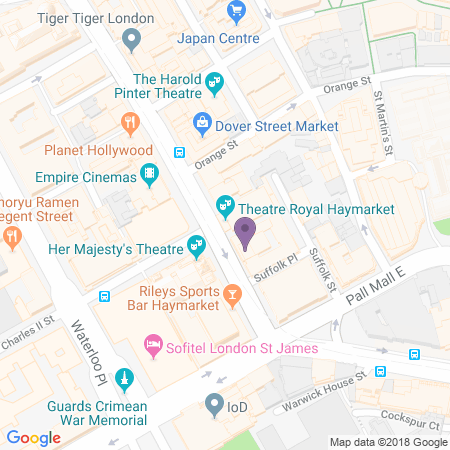 The Theatre Royal Haymarket’s fabulous six pillared frontage is impressive in itself. But inside it’s simply stunning, with wonderful painted ceiling murals, gleaming gilt engraving and cool, exotic marble walls… all of which probably makes it the West End’s most beautiful theatre.

A young carpenter, John Potter, built a small theatre on the site of the Kings Head pub back in 1720, in a rough, poor area frequented by thieves, next door to the Cannon and Musket gun shop. A brave venture, when it first opened its doors as the Hay Market the venue had a run of terrible luck. They didn’t have permission to stage dramas, which at the time required a Royal Patent or Charter, for a start.

Keen to stay open despite everything, Potter staged concerts and amateur plays, only to be closed regularly by the police. Then, just like in a fairytale, a French nobleman, the Duke of Montague, brought a change in fortune. He’d arrived in the city with his troupe of French Actors and a play, La Fille a La Mode, ready to stage. But neither of the official theatres in town wanted to put on a French show. So the Duke turned to Potter and made him an offer he couldn’t resist. While the play wasn’t a huge hit, it set the stage and the theatre went from strength to strength from then onwards. It enjoyed its first ever box office success in 1729, a spectacular show called Hurlothrumbo, which ran for 30 nights and packed the house. And the venue never looked back.

The profits from a production of Trilby at the Haymarket paid for Her Majesty’s Theatre to be built, and the Theatre Royal Haymarket hosted the first stage production of Oscar Wilde’s An Ideal Husband, back in 1893. John Gielgud acted as fire warden during the Blitz, setting up home in one of the theatre’s dressing rooms. And the past four years have seen considerable change, with the theatre’s revolutionary Masterclass Programme expanding slowly but surely and the theatre becoming a receiving house again for the first time since 1982.

The theatre’s colourful former manager, Sir John Buckstone, has been spotted – and heard – throughout the theatre on numerous occasions, by the audience and by the stars who have trodden its magnificent stage, including Dame Judi Dench and Patrick Stewart of Star Trek fame.

Past shows at the Theatre Royal, Haymarket

Recent past hits at the Theatre Royal Haymarket include Treasure Island with Keith Allan, the classic play Waiting for Godot, On the Waterfront, set in 1950s New York and Breakfast at Tiffany’s. They’ve staged Horses’ Tales and Sweet Charity, The Rivals, Flare Path, and The Tempest starring Ralph Fiennes.

You’ll find disabled access through the side doors on the Haymarket, and exits either side of the doors at the Haymarket foyer. There’s one wheelchair space at the back of the auditorium and if you can transfer from your wheelchair, you can use any aisle seat in the stalls.

We’re a popular destination for a wide variety of seat types and prices, with excellent availability on the full range of Theatre Royal Haymarket tickets.